Garnet is actually a large family of gems occurring in every color but blue, though it is often thought of as only dark red. Truly ancient, the garnet has been the gem of faith and truth for centuries, bestowing upon the wearer the quality of constancy and the ability to make deep and lasting friendships. Like other red stones, garnet was considered a remedy for hemorrhage and inflammatory disease and a general protection from wounds.

The name "Amethyst" comes from a Greek word meaning "not to intoxicate." Amethyst may be found in colors ranging from the palest lavenders to the deepest purple. Ancient Greeks believed that amethyst possessed the power of protecting the wearer from being drunk. It is given as a symbol of sincerity, security, and peace of mind. It is believed to be able to calm anger, quicken the wit and make one shrewd in business matters.

The name "Aquamarine" comes from a Latin word for its color meaning "sea water." It is a beautiful, light blue or blue-green stone. Aquamarine has long been the symbol for happiness and everlasting youth. It is believed to bring courage to its wearer, and strengthen the will. It also has the power to conquer evil, cure laziness and sharpen the intellect.

The word "Diamond" comes from the Greek word "adamas" meaning unconquerable. Although the most desirable diamond is colorless, brown, yellow, green, blue, pink, red, gray and black variations are also found depending on the impurities present. Of all jewels, the diamond is supreme and worthy of the name precious stone. It qualifies for all the virtues implied in that term: brilliance, hardness, rarity, antiquity, purity and permanence.

The name "Emerald" comes from an ancient Persian word "smaragdus", which means "green stone." The ideal shade for emerald is an intense green, distinct from any other green gemstone. It was attributed such great power that it was often used in powdered form to prevent epilepsy, stop bleeding, cure dysentery and fever, and avert panic. In addition, emerald was thought to make its owner eloquent and persuasive, bring joy, give the ability to foretell the future, and improve memory.

Pearl is formed in shellfish as a reactant to an irritant such as a piece of sand. Pearls are generally white, brown, silver, cream, black or pink depending on the type of shellfish and water. Pearl is the symbols of love, happiness, wealth, honor and longevity.

While the color can range from a pink-red to a purple-red, the most dramatic ruby stones are a bright, intense red. Ruby was also said to protect their owners from misfortune and to reconcile disputes.

Peridot is simply a French word derived from the Arabic for "green." Its color ranges from a springtime yellow-green to a warm olive green. It was believed to inhibit enchantments, to protect its wearer from evil spirits, and to glow in the dark.

The name "Sapphire" comes from the Greek word "safir" meaning " blue." Sapphire comes in every color blue, orange, yellow, violet, green, white and pink, except red. Blue is the most common color for sapphire. Considered pure and sacred and to confer peace and wisdom on its owner, sapphire is said to refuse to shine if worn by the wicked. Contemplation of a sapphire was also said to cleanse the soul.

Derived from the Sanskrit "upala" and the Latin "opalus", meaning "precious stone", no two stones are ever alike. The characteristic feature of the gem opal is play of colors; pure colors can be seen in rapid succession as the gem is moved about. Opal is a symbol of hope and jinx. The Arabs believed opal to be a gift from heaven that would fall in the flashes of lightening.

A common misconception is that all topaz is yellow. Topaz comes in many colors such as blue, yellow, pink, golden-brown, brown, green and clear. Topaz is revered for its color, clarity and hardness. During the Middle Ages topaz was thought to drive away sadness, bring wisdom, bestow courage, and even cure insomnia. It has also been used as a charm against snake bites.

Turquoise's color ranges from sky blue, dark blue, yellow-green, to green. Hindus and Persians believed that one who observed the reflection of the moon on a turquoise was assured good luck, protection from evil, and great wealth.

Why purchase from Cleary?

We adhere strictly to the following values to give you the confidence you need to make the right jewelry selection and purchase.

We wear your trust based on Integrity, Honesty and Expertise we deliver through our hometown service.

We adhere to an ethical code-of-conduct and best business practices.

We are sincere and truthful about the information and pricing of the fine jewelry we sell in our store.

Our combination of experience, skill and knowledge is quality we bring to help you make a confident jewelry purchase. 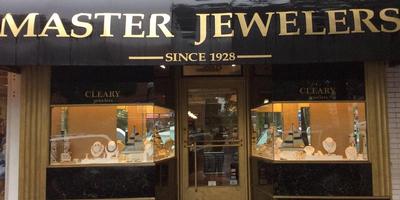